I run a lot of navigation classes and workshops – and it is always one of the most popular refresher days I offer – it’s a skill that needs to be practiced and can’t be learnt from books.

Perhaps the element I see people struggle with the most is being able to translate what they see on the map to the actual ground around them – and actually harder to do – to see on the map the features around them. “Hang on” I can hear you say “aren’t they the same thing?” – and whilst they sound the same, whilst they should be – all too often they’re not. On courses people will say things like “well there should be a fence….” or “I’m sure this is the right path”…and they’re missing out the most valuable bits of information that the map can offer us. 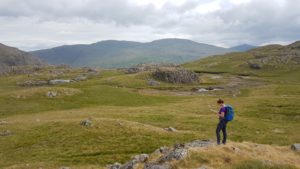 To understand better I’ll try and explain how maps are made.

Most maps that we’ll see are a complete picture – the finished article so to speak – and they’ll contain a huge amount of information. Contours, access land, waterways, roads, walls, fences, cairns, buildings, telephone boxes, orchards, place names – the list is nearly endless. But that’s not actually how maps are made. All of those items are layers of a map that are gradually built up, information on top of information upon yet more information – to test this simply look at a busy map square through a magnifying glass – more and more features will appear, many of them obscuring the detail underneath.  But some of that information is transient – some of it can be misleading – and often much of what’s actually happening on the ground can be missing. Yet there is some information that is always there, is more useful than other things – but for novice navigators this can be the hardest to use. I’ll often explain it to clients the following way:

“the older the information – the more reliable it is”

Place names are a relatively new thing – often less than a couple of hundred years old – most clients can accept that place names don’t exist in the real world, so let’s discard them. Paths can form – and disappear, over the course of a season – so I’m not a fan of those. Fences come and go – walls fall down.Streams can dry up, woods can be cut down – I’m sure you’re building a picture. Yet under all this one thing remains – the contours. Streams and rivers follow them whether there’s water or not. Lakes sit in them, ridges are defined by them, direction can be derived from them. When it comes to navigating contours are the most useful information we can have.

And yet people struggle…

I’ve tried many many ways to teach this, building hills from contour shapes, sitting and discussing – even drawing the land with one client. This week I tried something new. 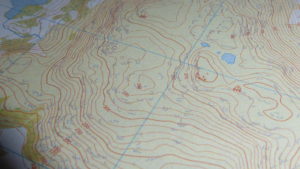 I’ve always known these are possible – indeed fairly basic versions can be sourced from many free websites – but everyone I tried was rubbish for actual use. I know that Harvey’s will make me a bespoke map – but wow was that expensive! I also understand that the data I actually need is now open source from the Ordnance Survey – and with recent time on my hands I tried for a good while to make that work – mind boggling unless you’re already an expert in the more arcane digital arts. In a final attempt to solve it I reached out to the instructing community – and Phil from Chasing Maps answered – a possible solution?

The short & simple answer is yes. 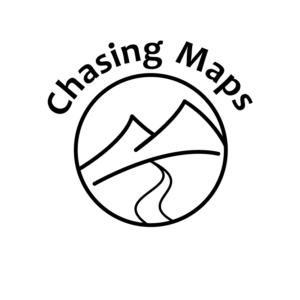 Chasing Maps offer instructors, their clients, in fact anyone wanting to improve their navigation skills,  an accessible way to choose different levels of detail – here in the Lake District I’ve opted for their Natural Features product (this shows Contours, Access Land by colour, major water features (tarns, rivers, NOT streams, and crags) – and it’s been a superb tool.

They offer other versions with both more and less data on.Whilst there’s already a catalogue of popular areas Phil is more than happy to make a map of a bespoke area for you for a much more modest fee than Harvey’s.

Having run a three day assessment level navigation workshop I can categorically say these made a substantial difference to the candidate’s skill development.

We set out with both a standard OS 1:25k map and the Langdale NW Chasing Maps version. For the first couple of points we used both – and as expected, whilst contours were mentioned in ascertaining a location the visible paths and walls and minor streams were how a location was confirmed. For most clients the man made features seem more easily recognisable – when they’re there!  So then we 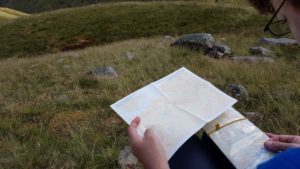 used the Natural Features map to confirm – the lack of “noise” on the map was initially disconcerting – but quickly the shape of the land, the subtle turns of contours, the start of re-entrants, all features that don’t change, became clearer to see and started to be referenced more. Next we headed over the back of Pavey Ark (we may have ambled over Jacks Rake just for times sake….) to an area where many of the  OS Map features – or as we were now calling them “clutter” – simply disappeared. And now the contour only map really started to make sense – now clients relocated by the shape of the land – by where streams and waterways should be – a much deeper level of understanding.

We finished the day with an OS feature that’s simply not there – a thing that’s indicative and can’t be found. At first this disconcerts many clients – but at the end of day 1 the client who’s leg it was confirmed where they were as the land, a very distinctive confluence of contour shapes, was laid out before them. I’d call that a result but I’ll leave the final word to the client:

“Like many ML trainees I’d been struggling to match land to map, in order to find those tricky little contour features, so I asked Kelvyn for some help. He put a contour only map in my hands, for comparison with the 1:25K. All the clutter was gone and the contours were easier to make out and understand. You could even say ‘the penny dropped’. I’m a happier client!”, Alison T.

Chasing Maps knew I’d be writing a post about their new product – but as ever they had no input into it. I received a discount that is also applicable to members of the UK mountaineering Associations (MTA, AMI, BAIML, BMG) I’m sure that there are other ways of achieving this but for me (& I’ve spent longer than most looking into it) this is the simplest and best I’ve come across. By the time you read this I’ll probably have ordered some more areas. The maps are ‘delivered ‘ as A4 downloads. They come to scale and I printed them onto ToughPrint – they worked first time. One double sided A4 suits an area larger than most workshops could or should cover in a day.