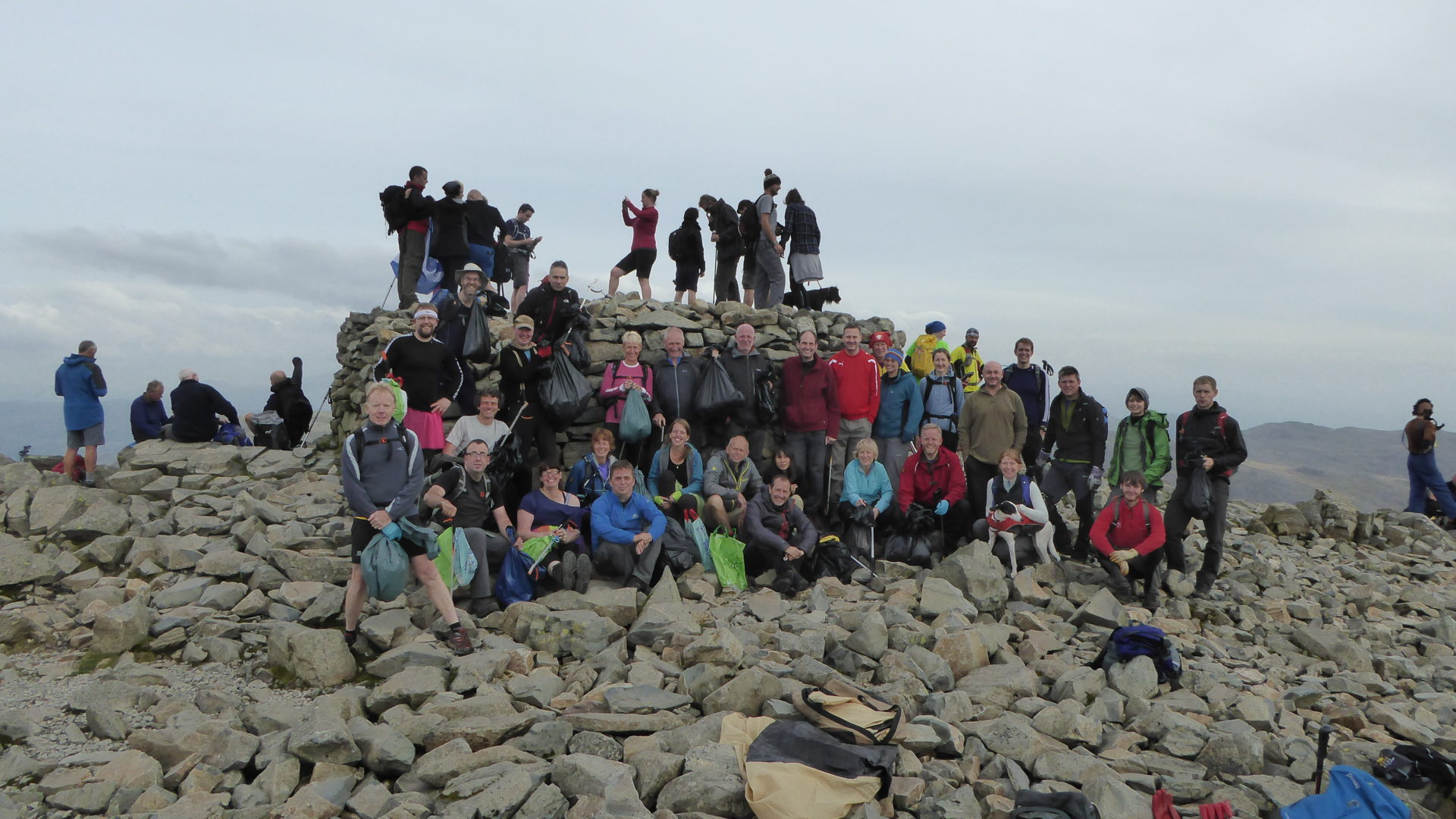 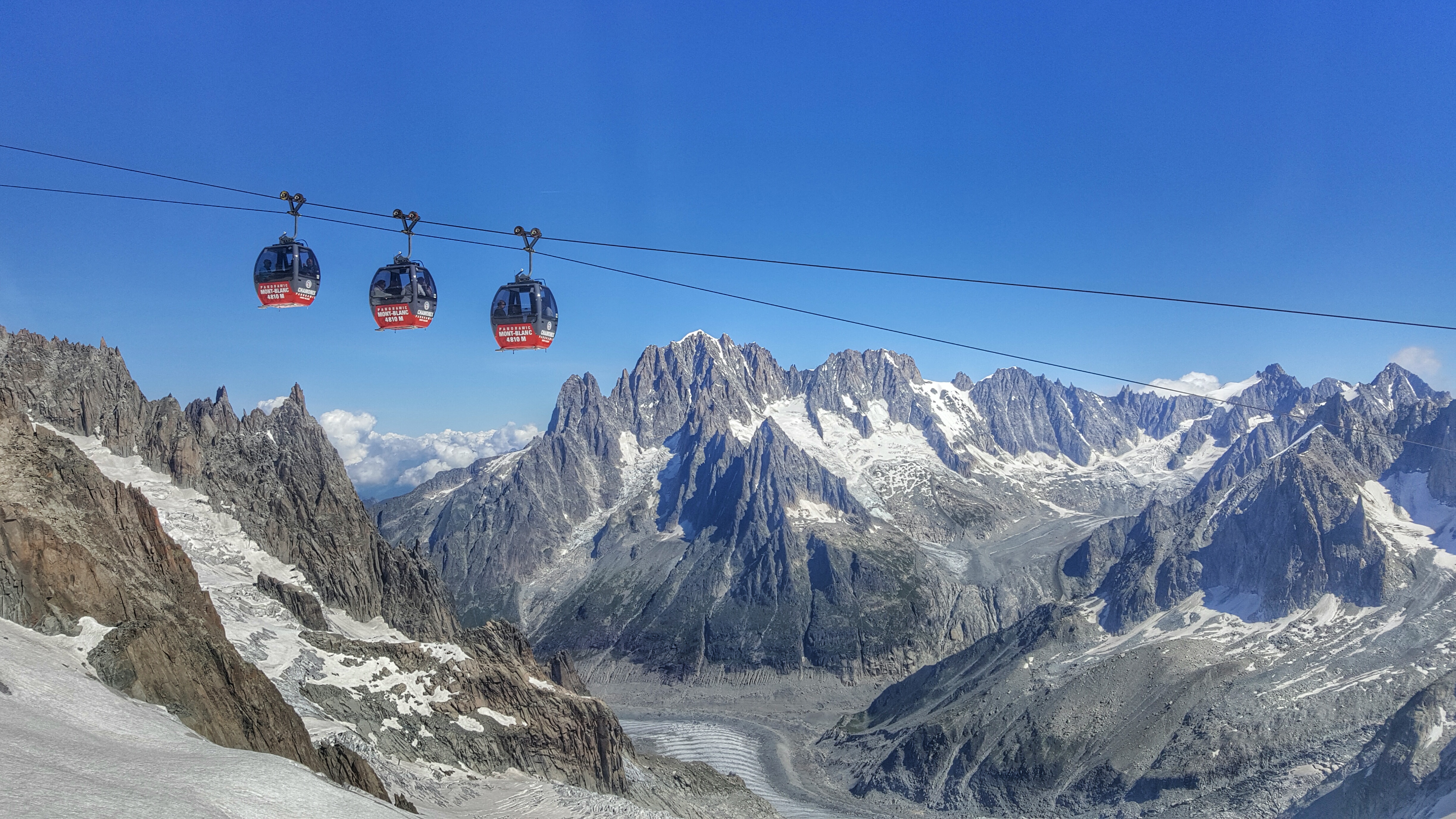 So what does a summer of work in the Alps really feel like & involve – well for me at least it was something a little like this…. 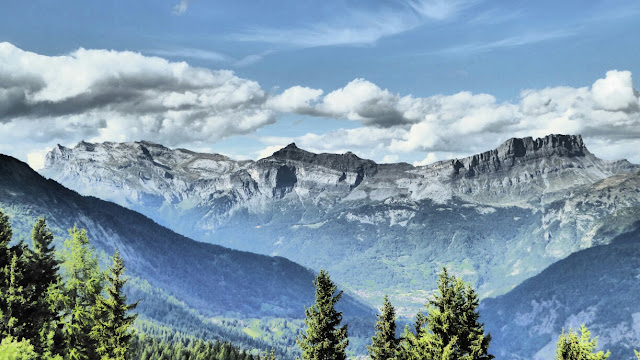 I’ve been blogging a few of the treks this year – but as my workload increased – and I spent more & more time on the trail, away from the internet (yeay!) it got harder & harder to do – but its a relatively compact walking season in the Alps – so now its over and there’s time to reflect.

One of the things I have consciously chosen to do is get to know this part of the Alps very well – we’ve chosen to make it our home for part of the year – and much as I’ve done for the last 15 years in the Lake District – I want to get to know it intimately – to see it in each season – from every angle, to seek out those hidden gems, to feel at home here & move past infatuation and fall in love.

This year I did a couple of weeks of day walks based in Chamonix & a lot of recce walks from St Gervais – but the bulk of my work was on two long distance  treks – the Tour du Mont Blanc & the walkers Haute Route – I did each three times & I can say hand on heart it was never the same twice – heck a couple of times it was so different I had to look at a map…. 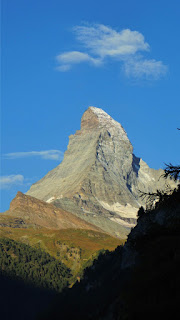 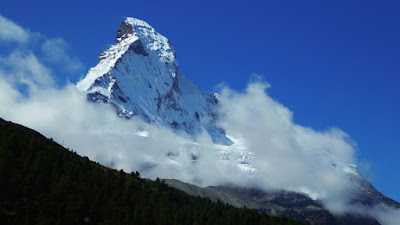 These two shots of the Matterhorn are a perfect example – 2 weeks & 1 hour seperate the pictures being taken – on one trek making sure everyone had enough water, carrying a water filter to provide more water – and insisting on sun hats was the norm – two weeks later I found myself breaking trail across the Augustbordpass in 4″ of fresh snow. I put in my daily journal that people often ask me why I’d enjoy doing the same trek a few times – well these pictures show one reason – the mountains never look the same – they change their faces and moods every time you pass by – and if you’ve a love of the real world, an enthusiasm for nature – then its a marvel to see and feel a part of. But there’s another reason – a powerful one – and this pictures shows it best 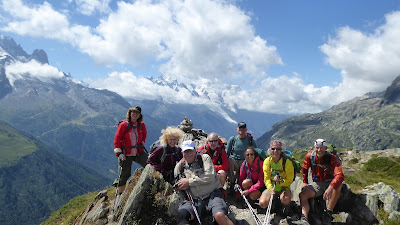 It’s the people I get to meet – I’ve always  firmly believed everyone’s got at least one good story in them – but the people you meet in the mountains – they’ve usually got a few!

This bunch – my Mighty Alaskans – were just so so so much fun to be around –  full of tales of adventure, bravery, sadness & lives lived differently & well. Quick to laugh & generous of spirit – good people to spend good times with (even if they did ask if they could shoot every animal we saw…well one of them did!) 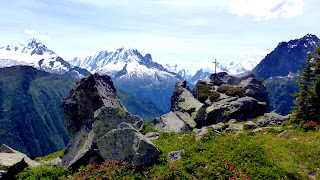 It’s not all plain sailing though – the very first group I got this year were simply horrid – and I don’t say that lightly. Occasionally (& it’s surprisingly rare) there’ll be an odd sort – someone who doesn’t interact or needs slightly firmer leadership – but this group of 8 were just not nice to spend any time with – so much so it left me a little depressed at the thought I might have a summer of people like this, I mean, when someone who’s paid to come to the Alps for a holiday describes this view as “well its just more mountains” – you have to wonder.

But, and its a big but, I’ve already hinted at the answer to this – 10 days later they were gone – I’d learnt more about me & my coping mechanism’s – I’d had some support from other Guides on the trail and in accommodation – and they were replaced by those 8 fantastic North Americans – and two months later writing this – I’ve started with the good & already forgotten the bad. I think its made me a better leader – it’s also made me appreciate just how wonderfully diverse my new career can be.

So what were my personal highlights? 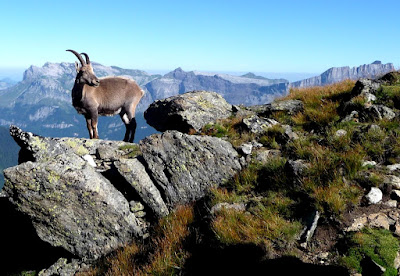 Well it was a summer of amazing wildlife encounters for one thing. Getting to be in the Alps really early season , before the trails are busy, its a chance to get up close to animals that will soon be scared away.  I’d like to think I’ll never ever take that for granted – but I’m slowly learning that the wildlife is always all around you  & with a little skill, a dose of luck and a healthy measure of perseverance you can find them and share a moment before they disappear….. 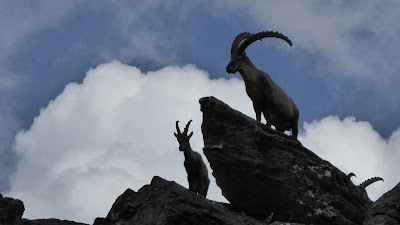 ….or not in the case of some of the

big Ibex we met on my first trip through the Grand Desert on the Haute Route. We ended up sat just a few feet away as a herd of 30 plus animals wandered by – with the largest male I’ve ever seen standing guard on an outcrop – something I’d not have thought possible. 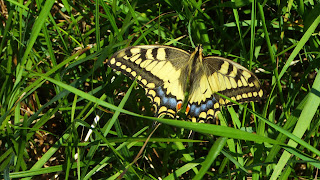 We also met Chamois, snakes, marmots galore – watched Golden Eagles & Lammergiers soaring – and got to witness the bizarre gathering of dozens of Griffon Vultures around the Col du Bonhomme this year – something that all the guides I know found equally intriguing – as these huge birds soared in intricate patterns in the skies above us. 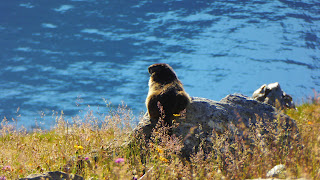 Finding Edelwiess on every Haute Route for the clients was a nice touch – but the flowers as ever were simply wonderful – I knew a lot of them to start (yes I’m a geek) – but each trip I find new ones as the season changes so rapidly.

June was yellow and white, July was the wonderful pinks of the Alpenrose & August the gentians shone blue in the fields – even with the strange weather everything seems to take a turn, a wonderful display from mother nature. 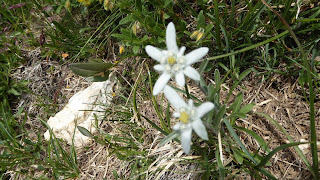 The other year on year on year benefit is the developing Camaraderie of not just my fellow Guides on the trail – but also the Guardians & Wardens in the huts & refuges. Something as simple as helping out with the washing up when the refuge was short handed helped build friendships and led to a long exploration of the finer points of French Brandy.

Returning with new clients often felt like calling on friends – and I’d like to think made it a better experience for the clients too! 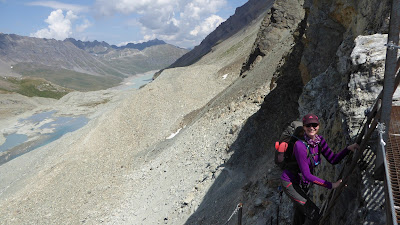 And at the risk of sounding like a broken record – it really was the people – even those bad ones just served to emphasise the good – seeing people’s faces as we crest the Grand Col Ferret – the look of achievement (& quite often the bear hug) when they get to the top of the Pas d’Chevres ladders – the look of wonder as we floated across the Vallee Blanche – these are deeply human moments that its a privilege to share in. 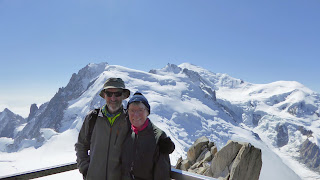 To be able to (hopefully) pass on a little bit of my passion for this place – my knowledge of its history – the stories of human endeavour, bravery, achievement and tragedy – it’s a great way to spend evenings over a cold beer or a bottle of wine – and so so often this trip I was with people with equally fascinating tales of adventure – landing planes on sandbanks, white water rafting through inescapable canyons – kite buggying across Mongolia – even appearing on Masterchef – everyone has a story if you stop & listen – and the mountains encourage that, in the peace and majesty of these surroundings listening is the most natural thing in the world.

Was it a good year for the weather ? 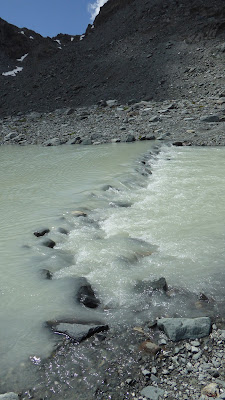 I said earlier it was a mixed year – I’d never really realised just how hard a heatwave in the high mountains would be – I’m British so I’m built for cold – I’ve travelled a lot so I can take the heat – but when its 30 degrees centigrade at 3000m – suddenly there’s a whole new set of factors to consider.

Streams & rivers that last year could be stepped over, or relied on for water, went to either end of the spectrum – some lower down dried up & disappeared – those higher up & fed by glaciers were in full spate for a lot of the season – the usually amenable ford in the Grand Desert was a thigh deep crossing on in July – my shoes didn’t get wet September – but it was exciting every time as the water either side was 3-4ft deep and freezingly cold!

My lovely Alaskans excelled at the water crossing – but were simply frazzled by the heat – carrying 3litres of water a day often wasn’t enough – but it did give us a good excuse to stop at every buvet & refuge along the trail.

The other major factor this year was the effect a low snow volume winter followed by a heatwave dry summer had – landslides became common place, routes I’ve taken before simply disappeared – in the high mountains the sound of rockfall became almost the norm – and suddenly everything was a little bit more serious – the network of Guides, route books in the huts – talking to others on the trail – suddenly it wasn’t pleasant or courteous – it was vital. I stopped on a solo crossing of the Fenetre d’Arpette to assist a French lady who’d taken a fall when the path collapsed beneath her – holding her still & stopping the bleeding from her smashed lips my mind was already altering the plan for my clients the following week.

& then of course – as it does in the high mountains – it all changed…. 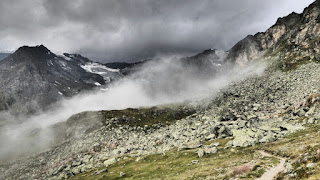 Clients who’d come prepared for summer suddenly found that where two weeks earlier we’d been in shorts – suddenly Goretex & gloves were the order of the day. Ice cream stops became chocolat chaud stops – and everything got just a little bit more serious… 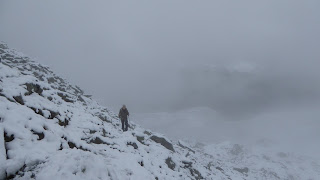 On a personal note it let me know those core skills of focus, anticipation & understanding truly are locked in – the things that can’t be taught on courses & from books – what we instructors refer to as ‘the miles on the clock’.

I took no joy in rescuing the French Accompagnateur & her clients on the grimmest of days – but there was a professional satisfaction in knowing my choices had been right – my group were safe & I could go to their aid and help get them back on course.

It’s good & natural to be a little scared, well at least respectful, when the mountains show the darker side of their face – watching landslides and rockfall from a safe distance was impressive – but knowing we were at that safe distance for a reason, because of dynamic decisions I’d made,the decisions that if done well your clients never see – well that really made me feel at home in my environment – at peace with the choices I’ve made in my life. 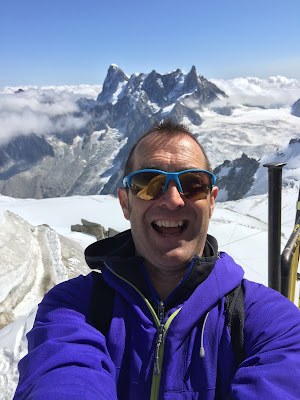 So that was my Summer Season in the Alps, June to September flashed by in a blur:

& far too many happy memories to count!